And the Winner is...

I recieved nine comments and thought it would be fun for you to read what you didn't know about some of my readers.  Very interesting stuff!  If you don't read these people's blogs maybe you can click over and check out their blogs!

I never know if being the first commenter is good or bad when it comes to giveaways... :D Guess we'll find out.

Something you don't know about me: When I was in 9th grade, I "dated" a boy who spent his early life signing (with hearing aides); therefore, being inspired, I checked out all signing books from the library and taught myself some sign language. (I recall a bit, but have forgotten most.)

momhooten said...
I have lived in Amarillo, TX for 17 years now. When we first moved here, we said the first chance we get we're gonna get the he-- out of here. Guess we're stuck here now since grandkids started arriving.

Happy Cottage Quilter said...
I love sweet Iced Tea, but especially tea from Chick-fil-a!! Thanks for the fun giveaway!

sherryberrybim said...
Can you believe I have 2 daughters named Jennifer? Actually, one is my stepdaughter. She didn't live with us growing up but it made things interesting at times.

wackywoman said...
Hmmmm. I worked in Silicon Valley for years. One of the companies I worked for had parts that went to Jupiter. Another (in the 80s) was building things for TV that would allow someone to play a movie or play a game anytime they wante (ON-DEMAND?) Paid TV was new and they had the ability; but, knew that the public wasn't ready for anything like that at the time. And, we just take it all for granted now. Thanks for the giveaway opportunity.

scottylover said...
Well, let's see, what can I share that won't get me in trouble? :)

I absolutely LOVE Say Yes to the Dress and can't wait for it to come on. I even watch the reruns over and over again!

Shannon said...
What a great give away! Well I love scary movies. Not the slasher types but the paranormal stuff. I watch them by myself because nobody in my family likes them. LOL! Thank you for the chance to win!

Becky said...
Something you don't know about me? Well did you know that at one time I had a blue belt in Tae Kwon Do? I quilt after I was about 6 months pregnant with Alex and never had the money to go back to it after he was born.

cherylj said...
I am a patent agent writing patents all day and use quilting as a stress reliever...and I am your newest follower

Here is what the giveaway was for! 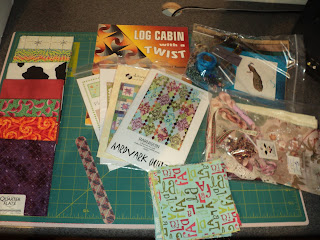 and the winner is #5 Wackywoman!  Send me your address and I will get the loot out!  AzAndee (at) cox (dot) net
Thanks all for entering and happy quilting!
Posted by Andee at 12:20 PM

Yipee!!. Thank you sooo much. I will look for you email addy and send it to you that way.