Fireworks! Mystery Quilting on the Rim!

Linking up for the NewFo linky party for February! 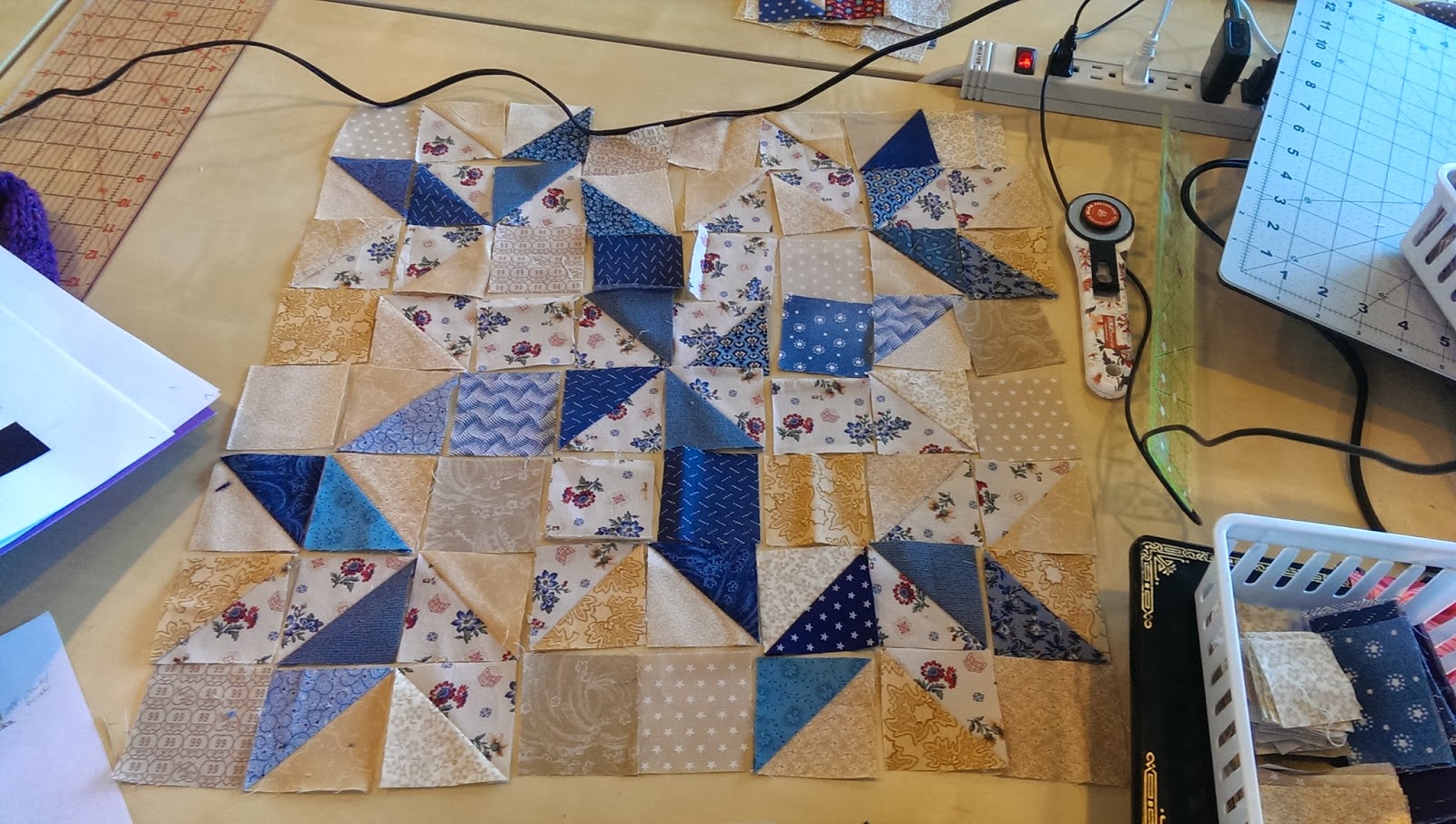 Becky and I headed up to Show Low in the early afternoon for the Quilting on the Rim annual mystery!  This was our first time going there and we already signed up to go back next year!  Marque Jacobs was the mystery writer and she gave us a doozy of a mystey!  Here are clues one and two.  Clue two was four huge blocks with a difficult (to me) configuration.  I had chosen a background-ish looking fabric for my accent and I knew it was risky...it made the layout really tricky and I did have to do a little unsewing once I got the first block together (and had to unsew the rows of the other three blocks--row two and four had an oops!)  I will say I was in good company with the unsewing...others had their entire middle section together when they realized they had to rip!  Our teacher gifted each of us with a sharp, new seam ripper--how did she know? 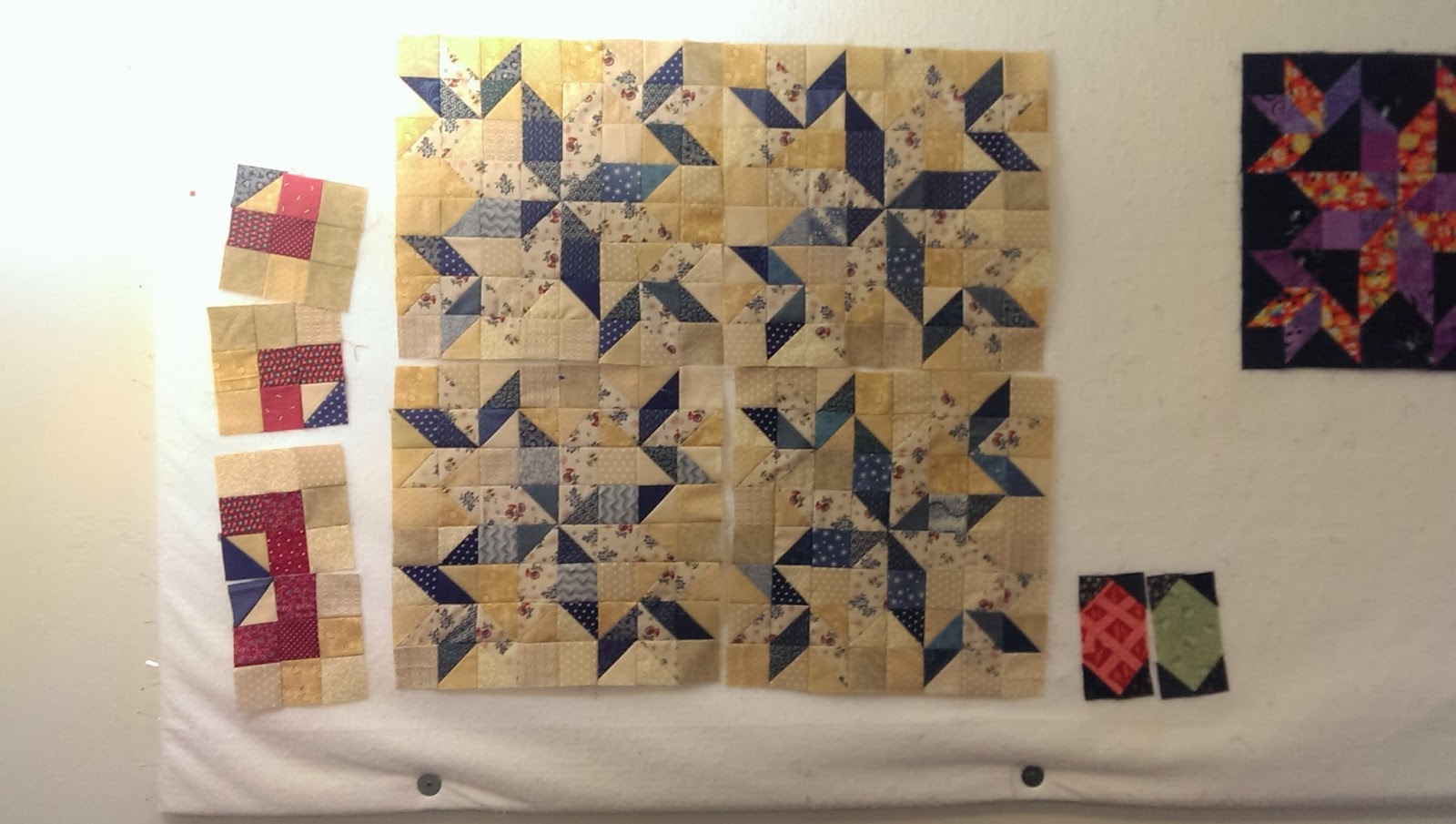 Clue three was my absoulte favorite part!  I don"t think I have ever made flowers before and these were just too cute! 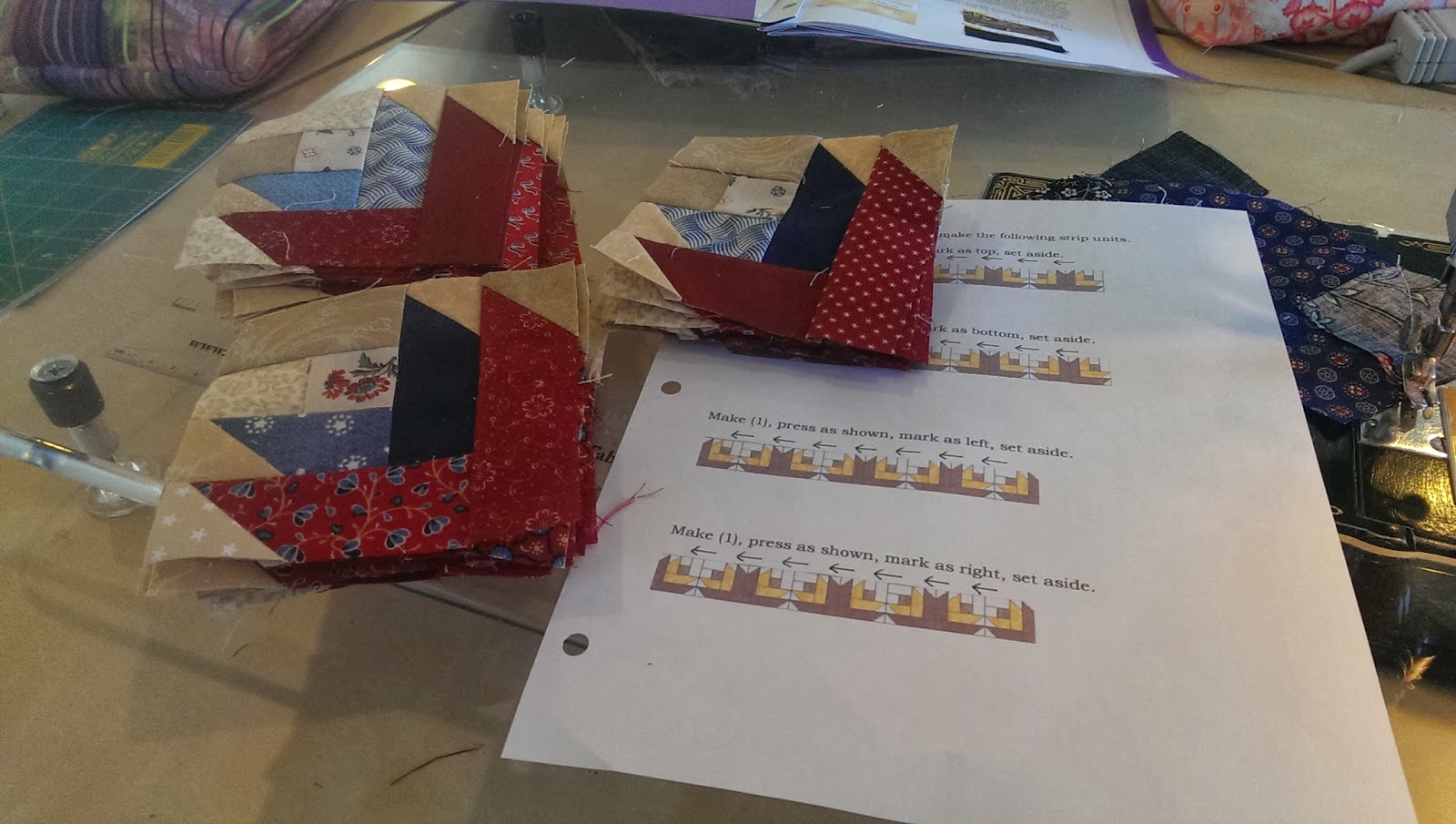 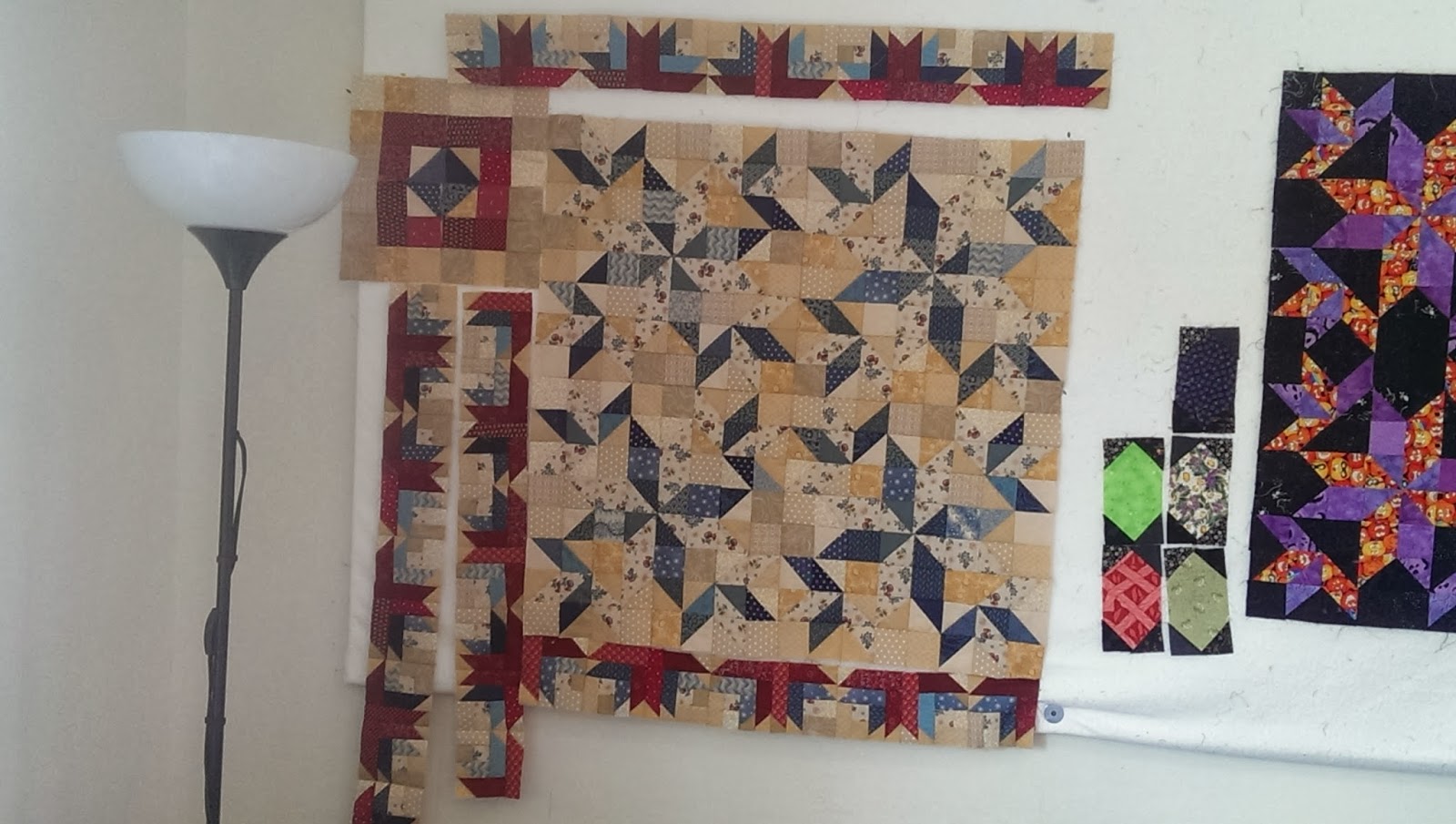 I had a hunch those flowers were going to be a border around the crazy center and I was right.  Can you also see my leaders and enders lozenges (Bonnie Hunter Challenge) starting to pile up on the design wall?
I had quickly cut a few the morning we left right after reading Bonnie's announcement and was really happy I had them to sew while I was there! 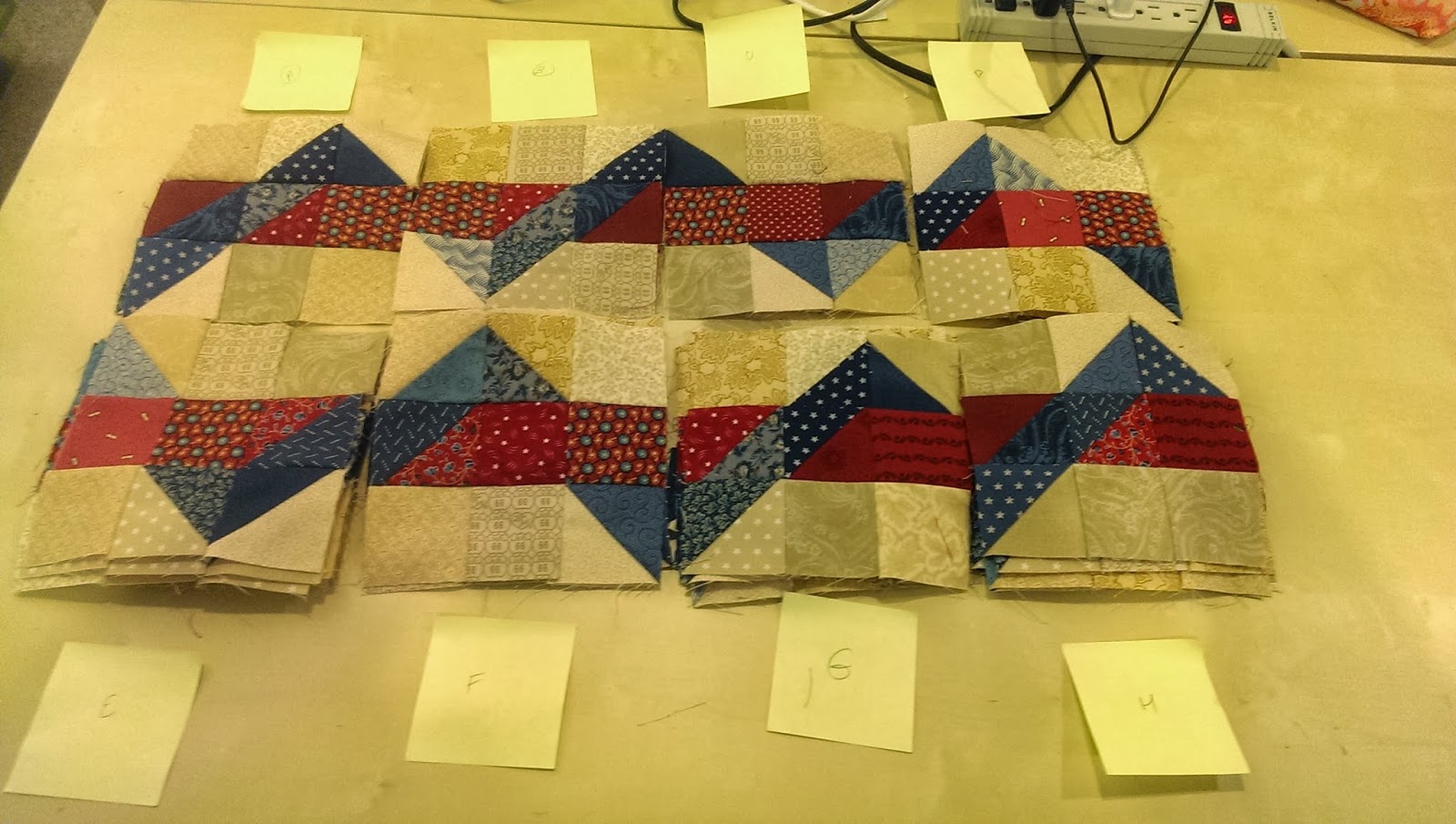 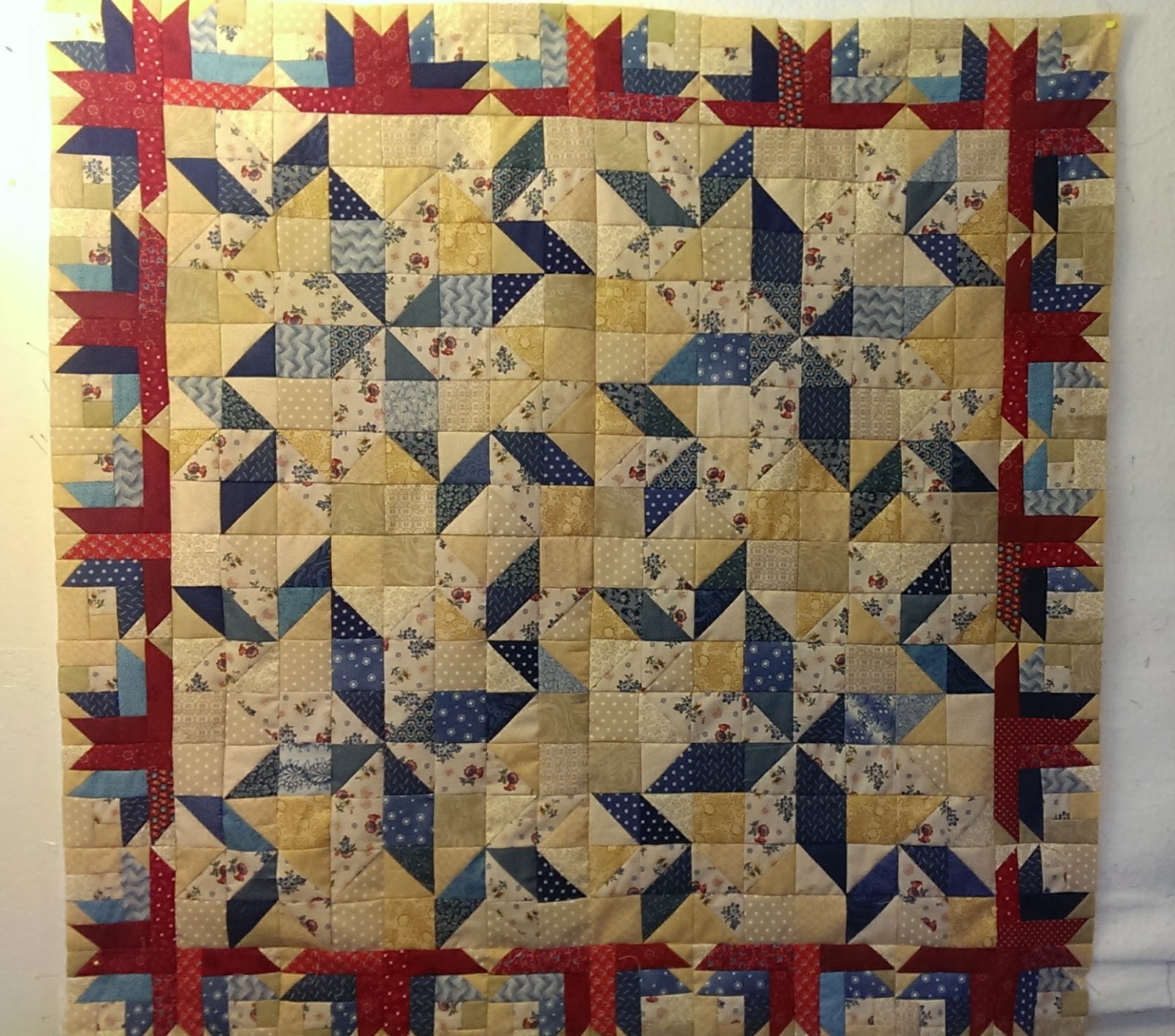 Above is clue four.  The teacher had us ironing all kind of crazy (ie, logical) ways so that the blocks would nest together.  I have to say they did nest perfectly so it was worth all the confusion til I got used to it.  She had us label our blocks, and I labeled all mine wrong (don't ask) so there was a little confusion later on, but easily sorted out so I could put these blocks into the borders!
I think this is the point I stopped at on Friday night.

Here I have added the larger off white (with tiny red and blue anchors) border all around. 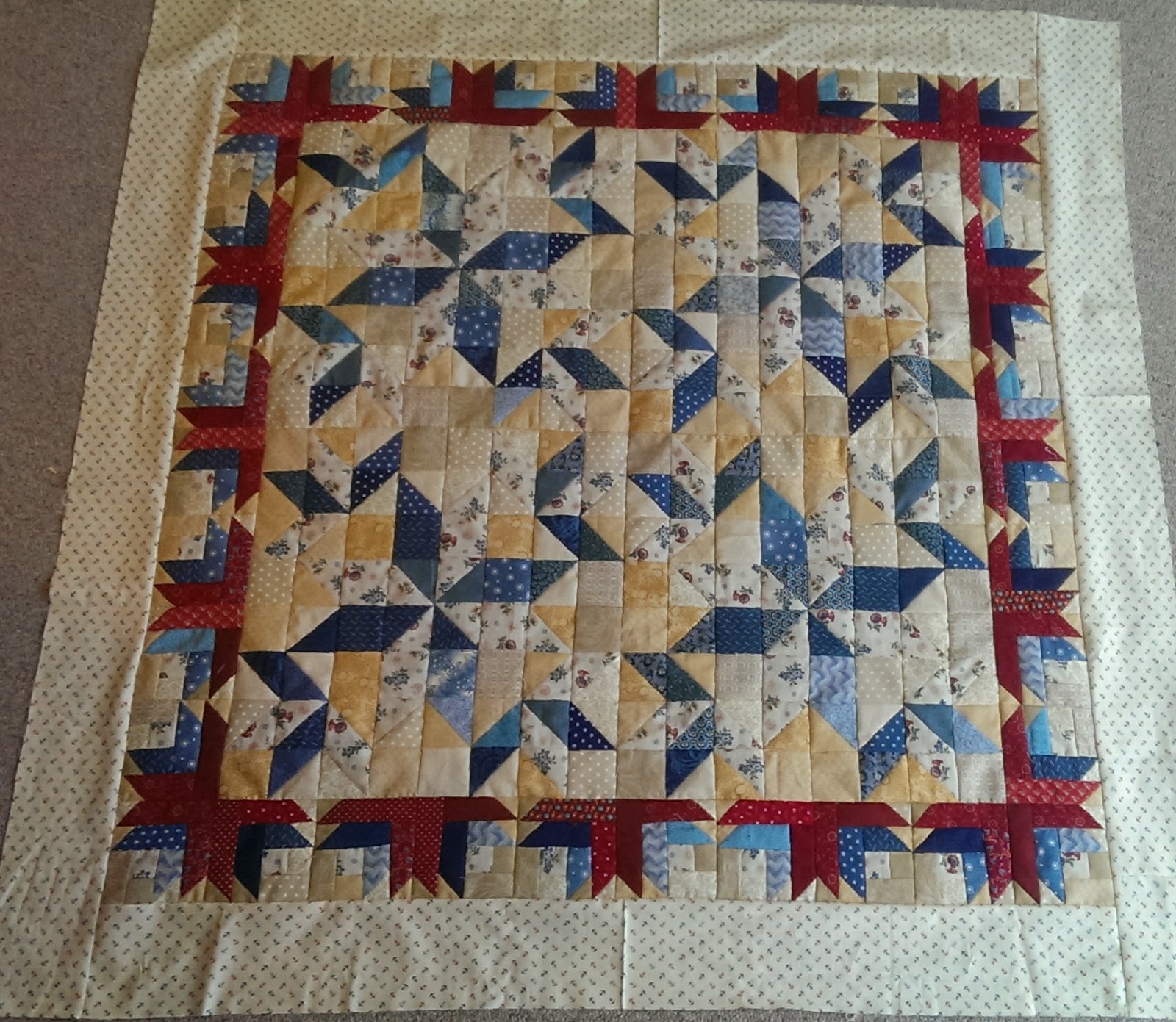 Saturday morning after breakfast the teacher revealed her quilt and gave us the rest of the clues. 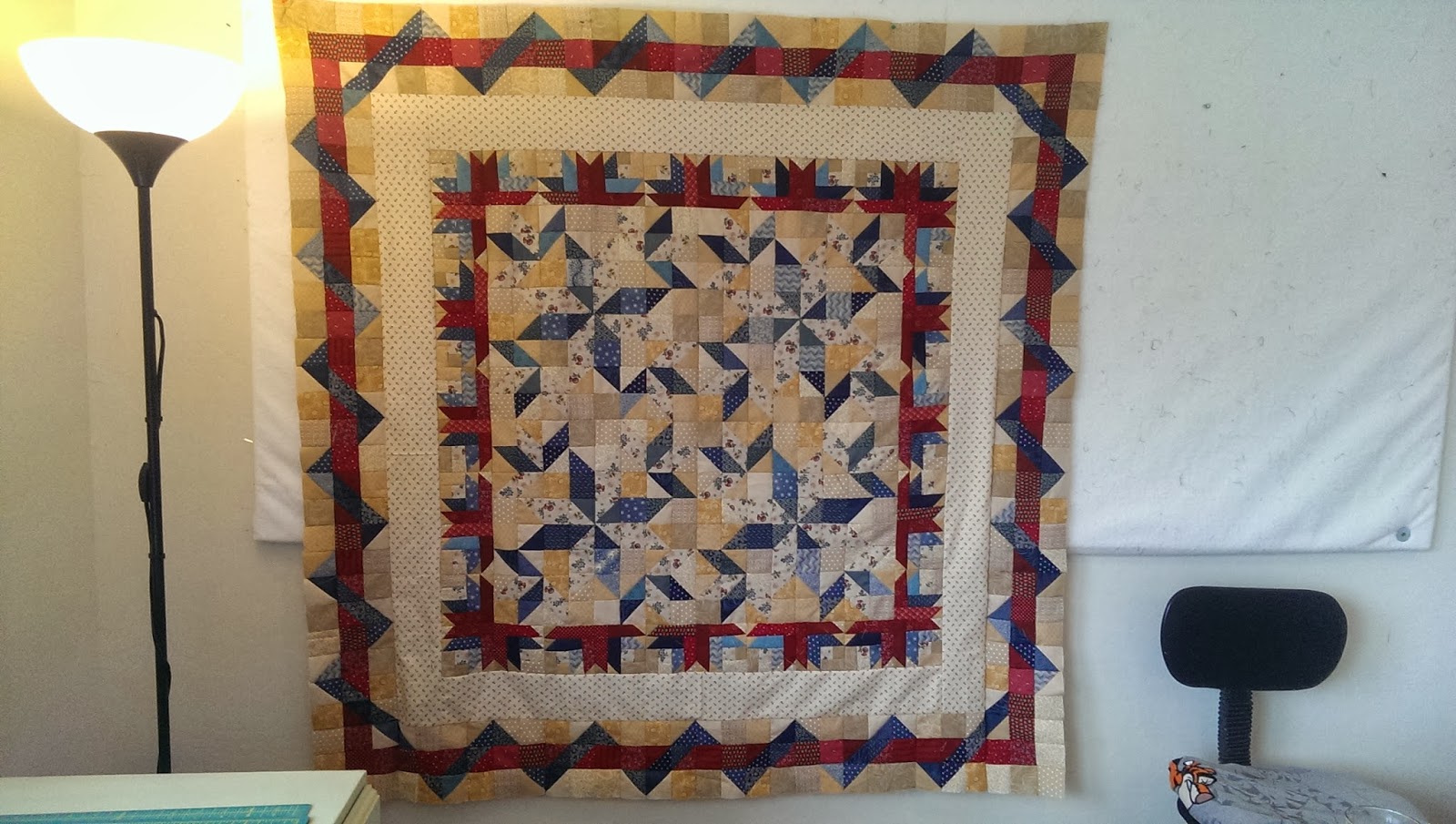 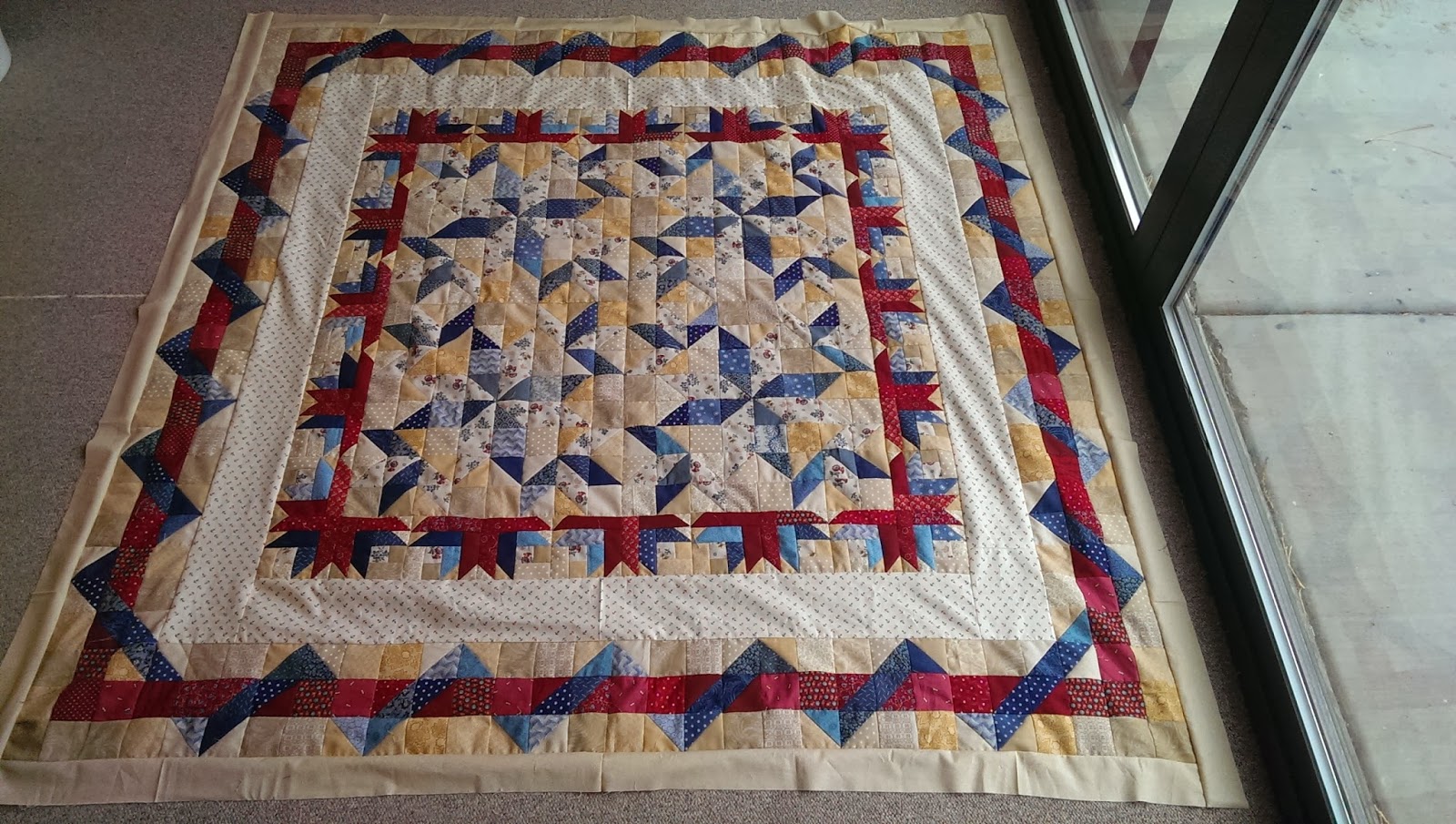 This is what the final quilt looked like.  It was raining on Saturday so I wasn't able to take it outside and get a sunny picture of it.  I am super happy with it and know that when it is quilted the accent fabric will pop more.  I have decided to name it Fireworks since the instructor didn't have a time and couldn't decide on one despite all the suggestions we gave her!﻿ 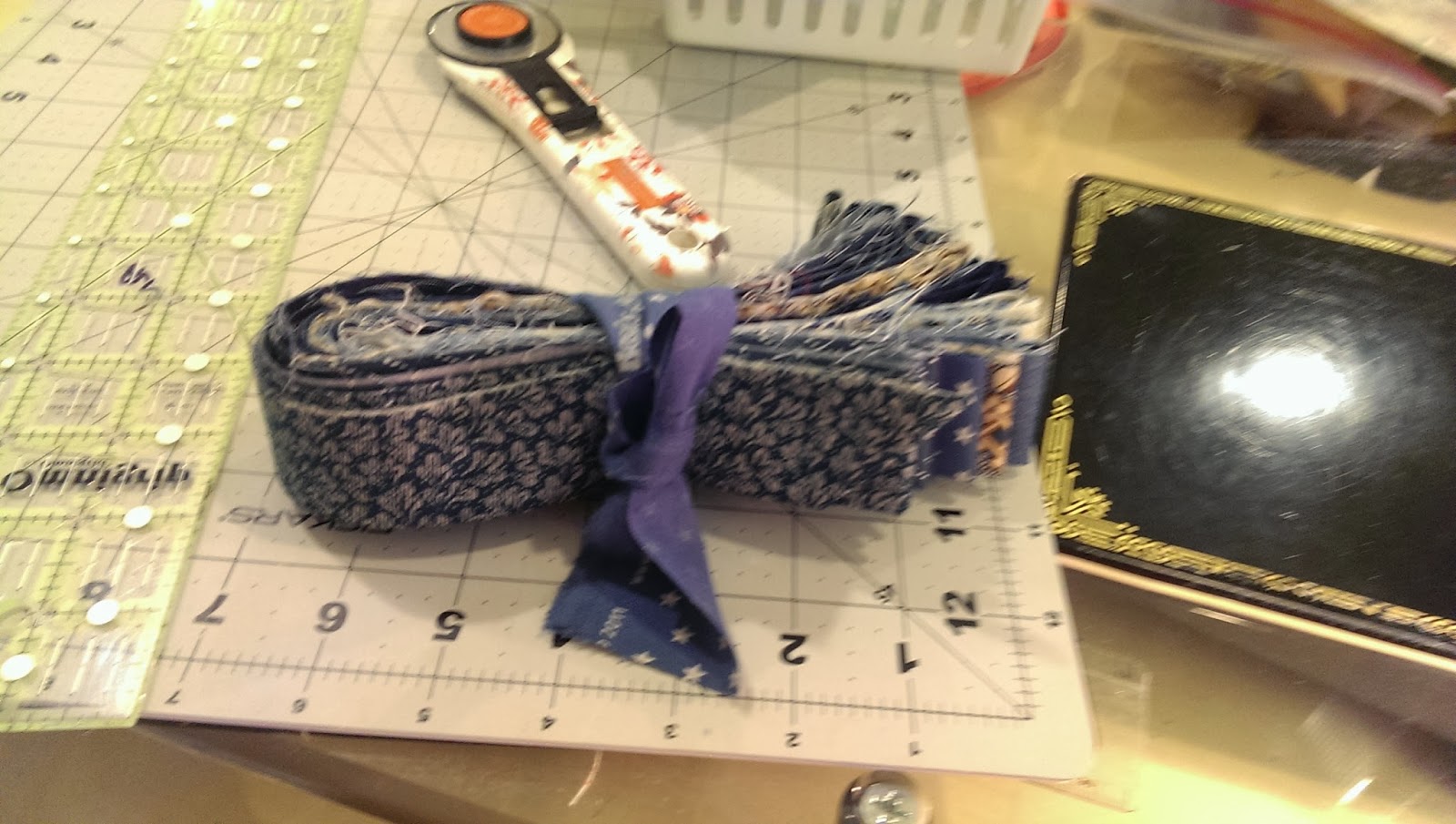 Since I was among the first done, I made my binding and got to working on churn dash blocks.  It was SEW much fun!  Cannot wait to do it again next year!

What a great pattern. I love the outermost border. The name is perfect.

This quilt is really wonderful! I especially love that border! Great job as usual Andee!

What a fun day! Love the finished quilt. Sounds like you picked the perfect name for it.

That's a gorgeous quilt and it looks like it would have been a fun mystery. Great effort by everyone. It's fun to see so many different versions.

Sounds like you had a nice time. Your quilt is very pretty!

That was a fun mystery quilt. Very pretty!

What a great pattern, Andee!

I love it - that border is gorgeous!