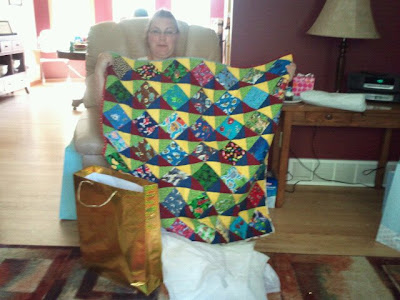 Here is Tara (and Koi in her belly) getting the Simple Quilt Eye Spy that I made for him! She likes it, and the last stitch went in the binding less than an hour before the shower! 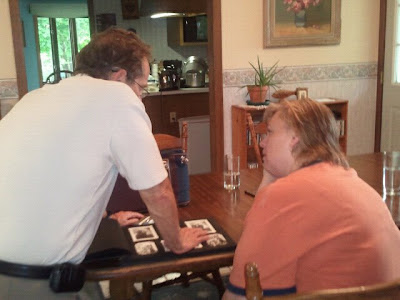 We are in Wisconsin on vacation at the moment. We arrived on Friday and my Uncle Jim picked us up and we spent the first night in Winsted, Minnesota with him and his wife Mary. This is Jim sharing family pictures with me. Jim is my Dad's brother. He has three suitcases of Neff family history and he shared some of it with me. I wish I had had more time because it was fascinating! Here are a bunch of letters...the oldest on is from the late 1800's but most of them are from 1943. The picture you see is my Grandmother Florence Lottridge Neff and my grandfather Leonard Harry Neff. She died when my father was six. The condolence letter from Len's father to Flo's mother and father was among these letters. It was really interesting to read about life for my family during the war. I wish I had access to these letters during my quilt history class. Florence mentions knitting several times, including knitting for the Red Cross! She also mentions a Mrs. Jones (her hubby worked at Lockheed with my grandfather--they were engineers) who did quilting while they were together! 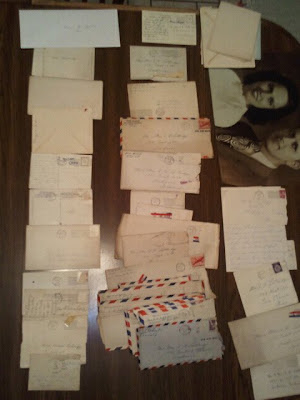 I learned quite a few intersting facts about my family from talking to Uncle Jim and speedreading these letters (DJ put them into time order as I read). My great aunt was a silent film actress and she once got my other great aunt Eck a part as an extra. The actress aunt whose name I already forgot (need the family tree to jog my memory) was married nine times! One day she got a ride across the set from some guy---who turned out to be Cary Grant I think it was! Flo's letters mention seeing various movie stars because they lived in CA during 1943. One of them was Mickey Rooney. Found out another relative was in a film with Ginger Rogers and Fred Astaire. I can't remember the film or the name of the relative already but maybe it was "Swing Time" with Victor Moore. I will have to double check!


Another relative, who was married but had no children, had the largest bell collection in some state. I got to see pictures of the bells (like the liberty bell but different sizes) and they left the collection to his sister I think it was and when the house they were in was rented out the collection was stolen!


Tomorrow I plan to finish up Mac's scrapbook!

I often feel a sense of amazement when reading over old/historic findings; amazement and awe that the documents in my hand were in relative's hands over 50+ years prior. Thanks for sharing!

You are so fortunate to have had access to such interesting family history. My family history has so many holes in it and very little documentation or photos. And sadly the people who were closer to the past and relayed the history orally have all passed on. So with families as scattered as many are today most of it is lost. Next time you visit family, take a scanner and recorder and capture as much as you can as that's the kind of information that should be copied in another location as a backup just in case. Glad you had a good trip.
Leslie