My Hexies for the Great Hexagon Quilt-Along

Awhile back I decided I enjoy hand piecing now and again and Ilove having a to go kind of project to work on when I get time somewhere unexpectedly. So I went to http://www.paperpieces.com/ and picked out the size of hexies I wanted to work with and then spent some time getting the hexies all glued to the paper. That was tons of fun and I randomly threw them down and took this picture before they were sewed.

I also gave a package of these hexies to June, BJ and Ros in the hopes it would entice them to sew along. I think BJ has one going though her method is different than mine. Not sure but Ros may have started one too....today I went to June's and worked on mine for awhile and coincidently she was working on hers. Here is a pic of her stacks...she is working with a smaller size and is making sweet flowers! 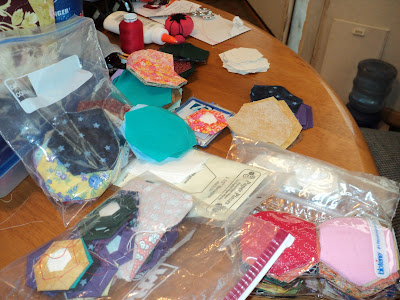 I have had a few hours to work on it here and there and I wanted to show you how it is coming along. I worked on it one day at work when I had an unexpected free hour and also took it with me to the Modern Quilt Guild's meeting a few weeks ago. Several of the gals wanted to know how I did it and they even asked me to show them how sometime. Since then at least one of them started her own hexie project with teeny tiny hexies that look like soup crackers! 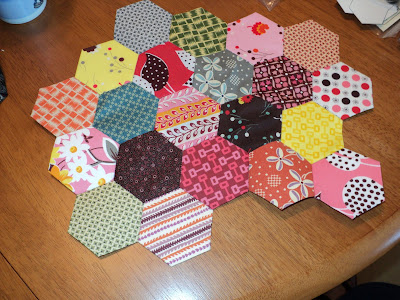 I am loving it!

This is going to be soooo pretty! :-) I'm so jealous of your Flea Market Fancy's!

They are so addictive. Can't wait to do one of my own