Hike from Hell and Block Therapy!

So last night after work I decided to join a "beginners" hiking group on the trail that I have done many times with Kathy at South Mountain. I was excited for a bit of a challenge because I knew the pace would be faster but the trail familiar.  When I arrived the leader and one other guy seemed to look me up and down and I immediately felt I had made a bad choice.  There was awkward conversation and then two more folks arrived.  One was new to the group like me and one was new to the leader of this hike.  The leader asked us where we were in our skill level (umm, beginner that is why I joined this group) and decided we would do a more difficult trail.  It was already getting dark by the time we started and we were off so fast that I didn't even get to start my map my hike app.  By the time we got to the top of the first crest my sock was under my foot and I asked to stop for 30 seconds while I fixed it.  I also snapped this picture about then. 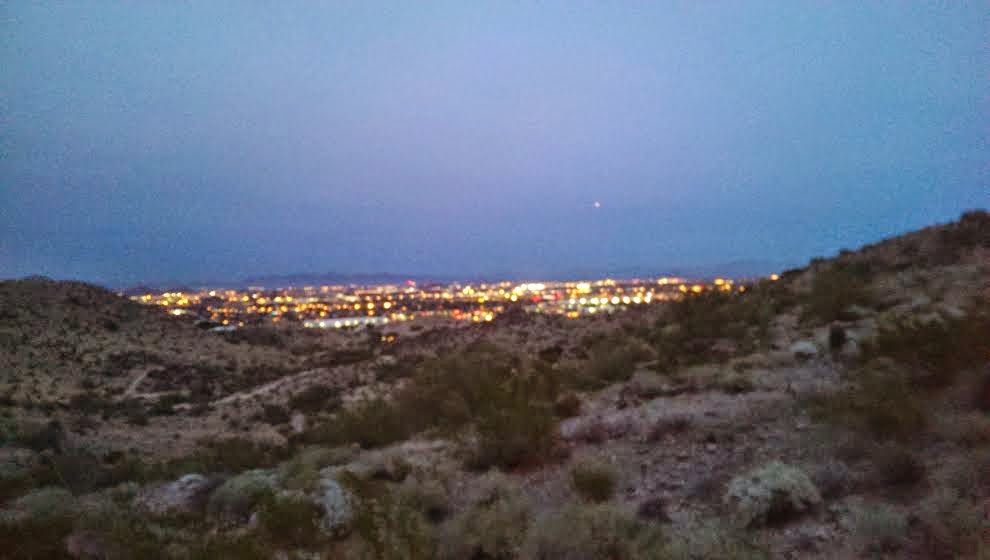 We continued along me chasing three of the people with one nice fellow staying with me (the new to the leader guy) who was the only reason I didn't just give up.  Thanks universe for putting him in my path.  We trucked up and down and all around and the three ahead did stop and wait two-three minutes or so for us to catch up a few times, as soon as we arrived they would continue on.  All told I "rested" for 30 seconds tying my shoe, 30 seconds before this second pic was taken (that was all the pics I got, we were moving so fast I could not stop to take off my jacket and had to do it while moving, and put my light on while moving too) and about 30 seconds when I fell.  All in all we covered three miles on very mountainous terrain in the dark in about an hour.  It was the most stressful hike I have ever been on and I cried all the way home.  So much for feeling like I have come a long way (down 72.2 pounds) since February.  I unjoined the group and told the person in charge they need to change their description which says beginnner, 2 miles in an hour and says the easy trail.  At the end of it all the leader said Monday night are our easy hikes.  My reply was well don't worry I wouldn't consider coming any other night if this is the easy hike.
I was so upset over it all I woke up in the middle of the night angry!  So this morning before work I quickly made the next Temucula Quilt Co "Christmas Past and Presents" pinwheel blocks for my mini mystery.  That helped me feel a little better (as did all my online support on fb). 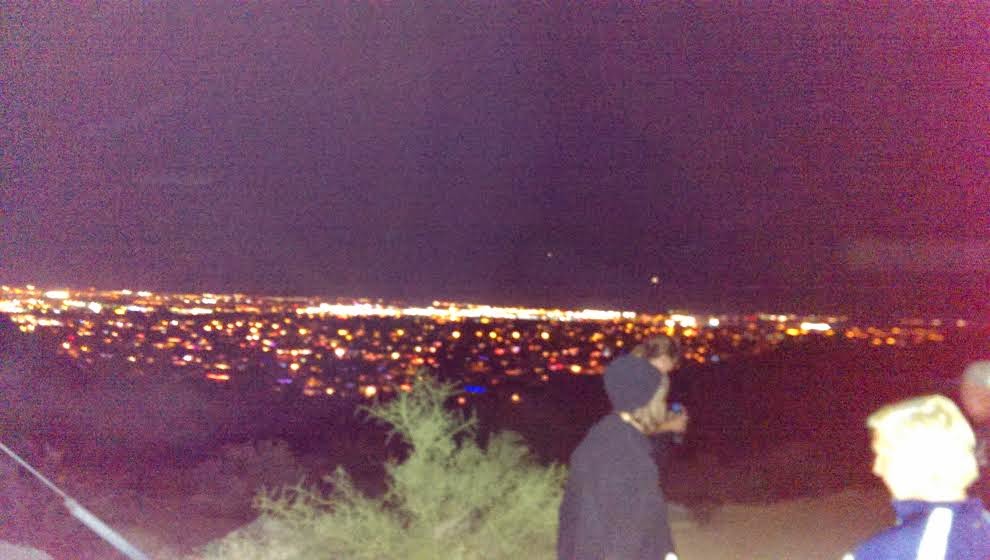 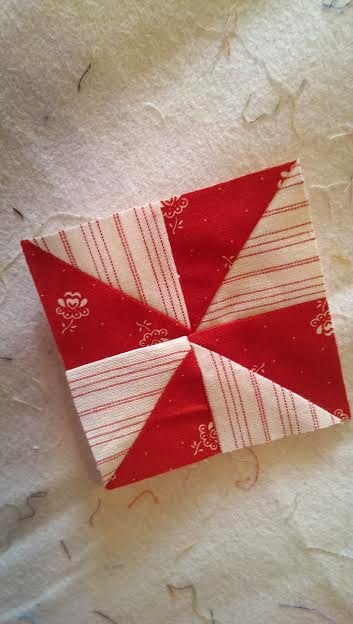 Here is one happy pinwheel and the first eight blocks! 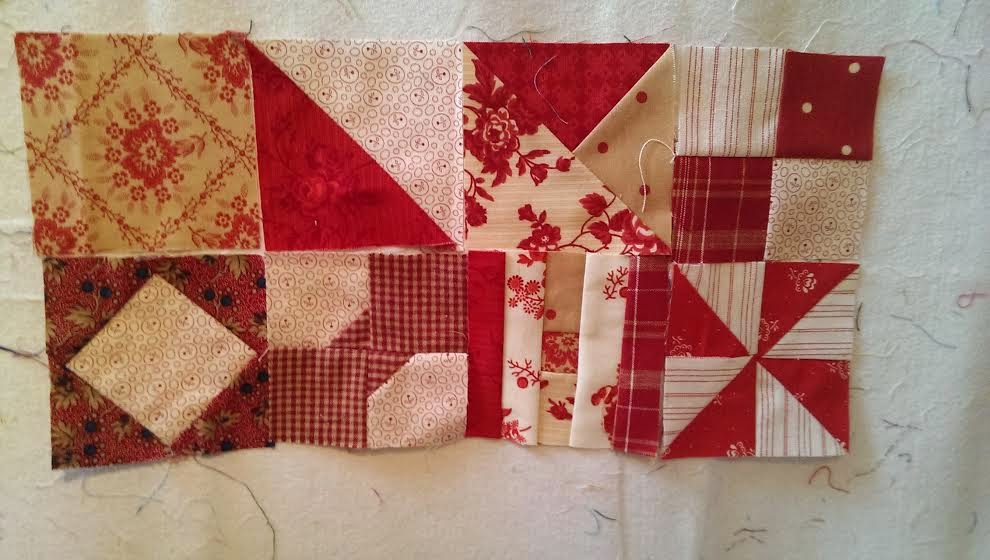 I am looking forward to the new project SoScrappy Angela has planned for us for next year's Rainbow Scrap Challenge (RSC)!  I am going to add this button to my blog.﻿

Here is this next year's plan!  Each star will have a different small sampler type block in the center.  How fun is that?  Really looking forward to it.  Click on over if you want more info and join us this year.  A few blocks a month and a gorgeous quilt at the end of the year!  Angela has weekly linkys on Saturday so we can follow everyone's progress and you get to know other bloggers that way too!  FUN!  Who's in?﻿ 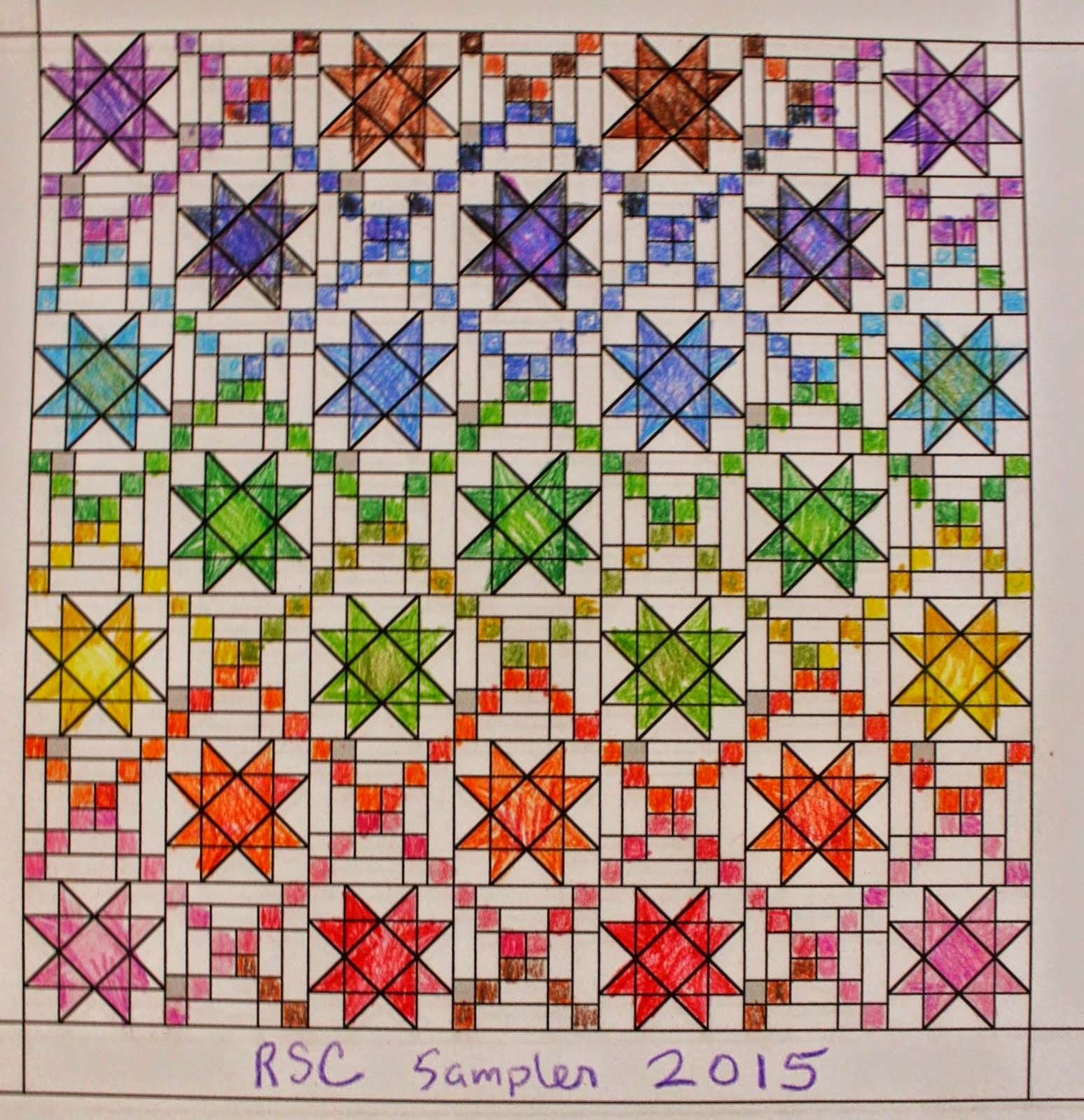 Sounds like torture to me :(
Amazing you hung in there and made it back safely.
You're a trooper!
I'm totally in for next year's RSC project

What a horrible hike!

But thanks for the info about the Scrap Challenge. That looks amazing, so I might have to consider joining in.

So glad you didn't fall down and hurt something on that hike. Sounds like bad advertising to me. You have been on such a great roll with your new lifestyle -- don't let one sourpuss upset your progress! You are awesome!
Love your plug for the challenge. I've got January all scheduled and hope to get started on February tonight. Winter break starts next week -- so excited!

Oh you should be so proud of your weight loss and even finishing that hike from hell! what a pain in the --you-know-what that leader was; how dare he look you up and down. He needs a good kick in the butt!
that's my thought anyway...after losing 30 lbs last year (15 of which i have re-gained--groan) I am back on my low carb dieting as of today. I am so carb intolerant it isn't even funny! Did you do Atkins, if you don't mind my asking? Well nuff of this...I love your blocks so cute...hugs and just let it go...Julierose

I would be angry too, and don't let those meanies make you forget how awesome 72 pounds lighter feels!

Some people just can't accept that we're not all the same, and that people who are different (eg women) are not necessarily inferior. Don't let them bother you: sooner or later that "leader" will get a dose of his own medicine.
I like your 12 Days of Christmas blocks; I still have to get started.

Over 72 pounds now? I'm so proud of you!!! You are my role model (as I choose to eat a healthier breakfast than what I planned just because I read your post.)

Thank the universe you made it back safely. I totally understand being mad about the "beginner" hike. That sucks! That happened to me one year after I joined a Bike Club that would help "beginners" on the rides. It went about the same as your hike except on a bike. I put my tail between my legs and went home and never did that again. I hope that you find another group. I'm surprised that they didn't recommend another group for you. You have been doing so awesome. Just think, last year at this time you wouldn't have been able to get 100 yards from the parking spot. Now you actually completed THREE miles in an hour in the dark! Mark that off your list. A new group will come along and be perfect for you.

Of course I'm in on the RSC15! I didn't realize there was a button for it. Wahhoo! Have a great day. Block therapy is always the best!

You just celebrate your accomplishments! Don't let others get you down!! You finished! THATS what matters! Just set goals! You can do it!

Yikes - good for you for sticking it out and finishing the hike in one piece. They did not advertise that correctly. Don't let them get you down - 72 pounds gone and you are doing awesome! Hugs and keep up the great work. You are an inspiration.

Sounds like a perfect torture movie... the hike from hell.... That is truly rude that a leader didn't adjust the hike for his group... I don't like him!

I am proud of you for stikng it out!

Oh NO! Hiking at night! That has bad written all over it ... can't see anything ... what is the point when you can't see the trees, sky, foliage. I'm glad you were not hurt. Don't give that extreme group another thought. Hiking is supposed to be fun.
Any hoo. Looking forward to RSC 2015.