An Early Christmas and a Few Blocks 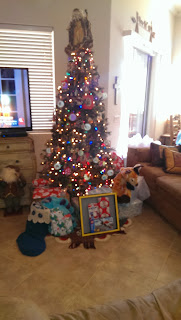 This past weekend we had an early Christmas up at mom and dad's house because my brother and his wife and two boys will be in Costa Rica this Christmas with her side of the family.  So mostly we watched them open gifts but we will be doing it again on Christmas eve without them. 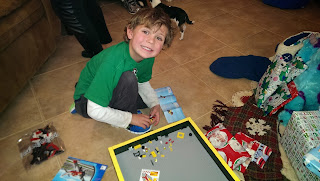 We gave Ben his lego tray and some legos to go with it, HE LOVED IT!  He spent a good hour or so putting both the car and plane together before we opened anything else. 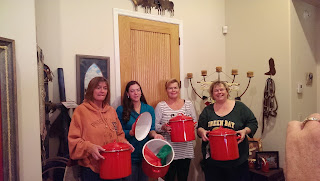 Since mom had gotten us each a HUGE soup pot (which I have wanted and needed forever) she brought that out to give to all of us.  That was fun.  Kathy and I have been working on more Rock Candy toppers.  This one is for Margie. 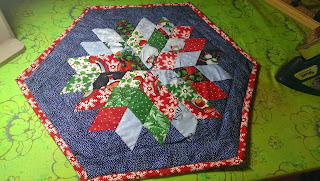 This packer one is for Randy to match his Green (Orca) Bay quilt. 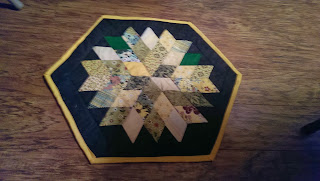 Several of the gals from our Celtic Solstice Kick Off Party and I are going to Tuscon in February to do a Bonnie workshop or two!  We got some of the last spots and I am signed up for both Playing with Jacks (which is on my list of quilts to make--I even have some fun balls and jacks fabric I bought with it in mind) and My Blue Heaven which I also love.  More to come on this later, but I am over the moon on FINALLY getting to take a Bonnie class (or two!) as I have wanted to do for years! 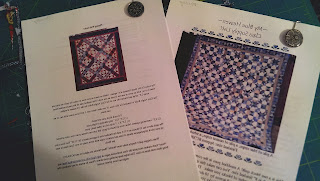 Speaking of Bonnie, here is my Jack in the Box quilt designed by her.  I have the center all pieced (that is two years of Rainbow BOM work!) with only two blocks left over.  I have pieced the borders but just thought it was too much like this and so I am glad I didn't just sew it.  I will be adding in an inch or so or a solid color to rest the eye on (thanks facebook friends for the feedback) my daughter suggested blue, I was also considering fabric with lots of colors in it, but I think a solid is the way to go to calm things down. 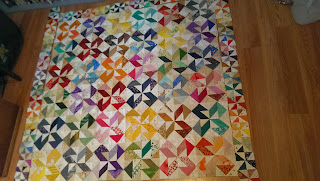 In other news, my honey bought me a dozen roses for no reason at all.  My week has just been awesome! 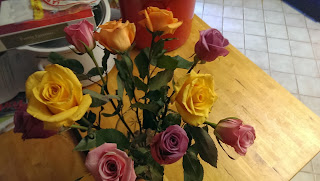 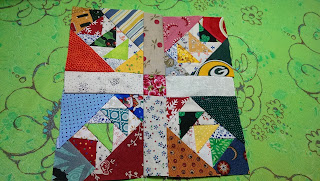 Tonight I finished up another Wild and Goosey.  Love this blocks and have a zillion more to go to get a top.  Am thinking I might want to sew them into the top to bring to show Bonnie..however small that may be...I also FINALLY got to working on my other Rainbow BOM.  I never got around to making the brown one, so here it is.  I think that brings me to eleven blocks now since I didn't make the fall colored block.  I will need to make one is some color because eleven blocks won't make a quilt.  These are the funnest blocks and give me a little string piecing fix too. 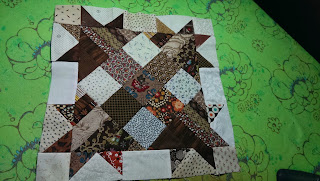 You are making beautiful Rock Candy Toppers Andee.
I will see you Saturday at 35th.ave! Last BOM clue hooray!

11 blocks is an odd number for a quilt. Hope you find just the right color for the last one, cause that quilt is going to be fabulous!

Love seeing the Jack in the Box quilt come together! Have you considered a white inner border? It should give the blocks sort of a floating effect.

Great soup pots... what a perfect Christmas gift!
Love your Jack in the Box quilt! It's a colour extravaganza!

Very pretty blocks. You have made an awesome rainbow quilt. It was worth the two years of blocks.

That jack in the box has been so fun to watch grow over the last two years. It is a stunning quilt and I agree - a nice solid to give a resting point will make it sing even more. Have you considered white? Your turkey tracks are great too - I wonder what color number 12 will be? Enjoy your holiday.