A Century of Progress at the Chicago World's Fair 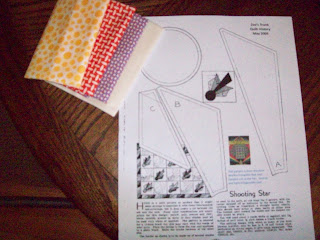 My quilt history group met last Thursday and we had a terrific discussion of the World's Fair and Century of Progress Quilt Contest they had back in 1933. We looked over pictures of many of the quilt entries including Emma Andrass of Prescott, Arizona's. The winning quilt was sent to Eleanor Roosevelt, but because of the controversy (of the winner not actually being a quiltmaker) the quilt seems to have disappeared! There were around 24,000 different quilts entered in the contest and they all had a special label with the logo on them on the back. In 1933 all the quilts were sent home but then when the fair was held over for a second year they asked for them back and redisplayed those that came back. Ida Mae Stow

had complained about her original quilt just getting honorable mention and in the second showing hers was front and center. This quilt was later bought at an antique dealer's and it was discovered to have the quilt label on the back though it was covered up with a hankie! Many quilts were made after the fair that were sometimes mistakenly thought to have been at the fair originally. One such situation was the "Pillow Outfit" design 2590...this was apparently a kit sold at the fair with embroidery...many people made these kits and at individual state documenting sites they kept being discovered and eventually the story was figured out!

Everything you could ever want was made and sold with the fair's logo on it. They even sell needle books from the fair on ebay for around 10 bucks now and then. The ice cream cone was invented at the fair as well. There was even a special label put on Singer Featherweight machines that were sold at the fair. How I wish one of my grandmothers had bought one of them. I still have three living grandparents (around age 80) and I plan to find out if any of them were at the fair or have personal stories about it. There are tons of websites with more information on the Century of Progress--even the original catalogs are online at http://hartcottagequilts.com/his5.htm#cop this includes patterns from quilts entered at the fair. The shooting star pattern there is the one we are doing for our block this month. We also discussed that the HBO special "The Making of Kit Kittredge: An American Girl" as a good 1930's era film worth seeing. So that is on my list of movies to see.

I started reading this book last night and it is all about the World's Fair so definately in theme. I am excited to increase my knowledge of the event! I got an interpreting job for two nights a week in June and am signed up to take a knitting class and crochet class and a couponing class too! My youngest son Mac will be here on the 5th and we plan to drag him around to see some sights and hope to visit the ocean while he is here too! Summer is looking good!


**edit**My dad's cousin Wes Neff wrote that "my dad, Ben Neff...was at the 33 worlds fair, A CENTURY OF PROGRESS, and on my desk i have a thermometer, from the fair, showing the logo and the year ....if you like I'll try and take a picture of it and send it along, it was a prized possession of his and one of the few things I kept." I also found the coinpurse, I had given it to my older son (and a polished rock collection to my younger son) and it says "New York World's Fair 1939" on it so it is from a few years later, different fair. But still! I talked to my Grandma Nan today (6/21) and she told me the story of my Grandpa Len and the 1933 World's Fair..so I will retell it here. It seems my Grandfather quit school in Chesapeake and moved to Florida with his family. He didn't go to high school there but worked on the farm. He and his brother Lewis and another friend got a crazy idea that they would ride their bikes from Florida to the Chicago World's Fair! The group set out to do so but the buddy's bike broke down or something and they wound up in Anderson, Indiana where his two aunts lived. They did make it to the fair and then returned to his aunts' and the brothers were made to stay and my grandfather to finish high school in Anderson. One of the aunts was Ester (called Aunt Eck). After he graduated high school it being the depression he had no money to go to college so he joined the GM Tech where he worked and studied and got his engineering degree. (second edit) My cousin Flo just sent me a message (8/14/2012) and told me that my grandfather worked in Anderson Indiana at Guide Lamp in the 1930's.  He attended college in Flint, MI and graduated in 1938 with a degree in Industrial Engineering and was a member of what is now known as Lambda Alpha Chi fraternity.  He was part of the same graduating class as Ann Romney's dad (wife of Mitt Romney the current presidential candidate).  My grandfather worked at Presto for many years in Eau Claire, WI as an engineer so thanks apparently go to Aunt Eck and company! I asked Grandma about the 1939 New York World's Fair and she didn't recall any story about that, but was sure he did go. Grandpa Len liked to travel and that would have been just prior to his marriage in 1940 to Florence. 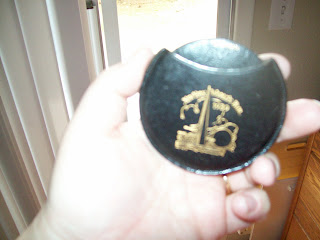 How interesting to find your post. I am working on a "blog" about the 1934 Chicago World's Fair based on my mother's letters. She talks about many things but never mentions quilts. There was something there fore everyone. My wife would have loved those quilts.

You can visit my mother's "blog" at Trudel's Truth

I would love more information about the shooting star pattern. My great aunt has a quilt from this pattern made by my great great grandmother shortly after the fair. She lived in Iowa, and we don't know how she got the pattern, but I would love to make this block one day!