These first three pictures you have seen before but I had to be hush hush about what exactly they were for so now I can show you what the gals of the PHXMQG did for one of members/chairs who is battling cancer.  Jacki and BJ are the charity chairs and within minutes (and I do mean minutes) of hearing the news they were off whispering to members asking for 12 inch pink block donations so they could quickly get a top together.  ﻿

So it wasn't long at all before BJ and Jacki were rearranging blocks, making a few more to round out the numbers, adding sashing and putting together a backing!  They brought the quilt to a meeting (which Limbania wasn't able to be at) to get signatures of our members (it didn't matter if they made a block or not) and asked if someone would volunteer to quilt it.
Love the signature block! 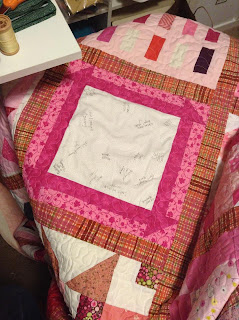 A BRAND NEW member who had yet to meet Limbania volunteered to quilt it.  Sarah did an amazing job on the quilting and also did the binding and brought it to the very next meeting to present to Limbania.  Here are BJ and Tiffany presenting it to her.  Limbania loves it and I think she was suprised to learn that the blocks she had been seeing were all for her!

﻿Limbania posted pictures of her using the quilt during her most recent chemo.  I wish her a speedy recovery and to know how much we cherish her at the PHXMQG!  My hat is off to the Charity gals (and all who contributed blocks including my partner Kathy who isn't even in the guild) for jumping up when they saw a need.  I am blessed to know these folks!
Posted by Andee at 3:16 PM

What a great story. She is lucky to have such a great support group.

Your blocks are gorgeous!