A Rainbow Scrap Challenge Finish and Clean Up and Prep 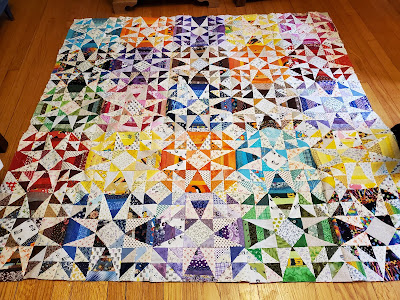 In 2017 I made Straits of Mackinac blocks for the Rainbow Scrap Challenge.  I did not put them together because I was waiting for Bonnie's full pattern to come out to decide how I wanted to set them.  Somehow a few years passed and this just hung out waiting for me. A few months ago I laid the blocks out, took a picture (which I apparently deleted) and put the blocks back in the box facing each other to sew them.  I did not pin (next time, I will pin!).  So since laying them on the floor and doing all that is a bit much for me some days with my energy level I just sewed them semi blindly together as they were.  As I went I realized I was not doing it as it planned at I had blocks of the same color lining up..ugh so I did impromptu twisting and turning and in the end, this is what I wound up with.  Not the best, but it is together so there is that. 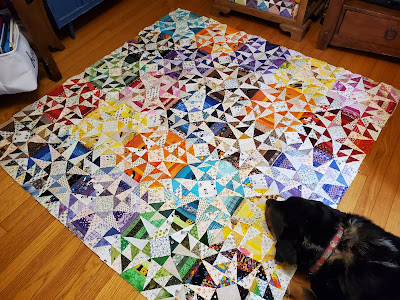 I only have a few UFO's left.  I took out my landscape quilt from SIX years ago...at this point it is not going to get done.  I need someone who knows what they are doing to help me with that. So back in the box it went. I have Circa 2016 left and think I am going to make a mini of what is done and then be done with that one too.  No motivation to finish it anymore. 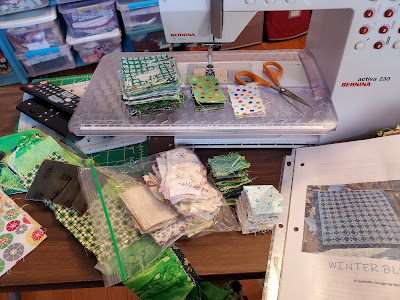 I spent a bit of yesterday going though my squares and random scraps.  I got out all my green fabrics and cut strips to add to the bag of the right size.  I now have another ready to sew.  That will be Winter Blues but mine more likely to be named Spring Greens.

A few weeks ago I got out all the plaids and cut for Moth in the Window, any yardage left got added to my already full shelf! Back in February I ordered some fabric from Facebook Marketplace.  I got a decent deal and had not bought fabric in forever.  I needed some reds.  I found a few and some eye spy fabrics and a few others.  So this got added to my fabric shelf here and there. 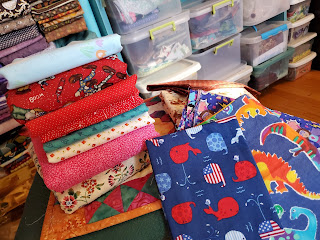 So all that led to reorganizing my fabric shelf.  I changed things around a bit so the same colors could be together.  It does not look all that different but it is a bit more organized. 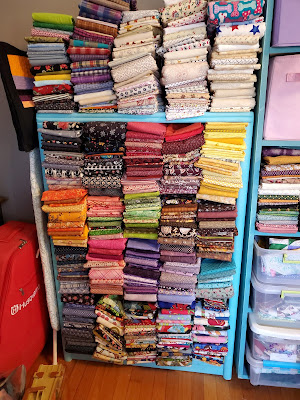 (before is above and after is below) 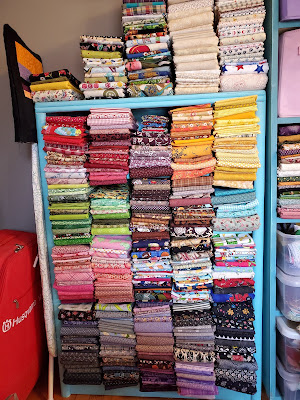 Straits of Mackinack looks terrific! So much color and movement - great finish!

Your rainbow "Mackinac" looks fantastic! Congratulations on all your organisation.

Great job. I have loved this quilt. It just shows me that chipping away a few blocks a month you get a great finish. On the fabric organization front super job. I need to do that too.

So much beautiful fabric! Congratulations on getting your blocks sewn together. They looks great! Good luck with the UFOs. It sounds like there is room for a new start soon.

Nice job on the reorganization, Andee, and that quilt top looks AMAZING in rainbow colors!!!

It is a beautiful RSC quilt, love it.
Great job with the organization.

it's always good to reacquaint with your fabric aka organize. straight of macinack look great in rainbow colors

Wow wow. Your straights of mackinac top looks magnificent and your stash does too!

Your straits quilt top looks wonderful, too many little pieces for me to cope with though. Good luck in finishing it up. And wow, all that wonderful fabric folded up so nice and neatly!

Your Mackinac quilt turned out very well - so colorful. Those blocks look complicated, love all the movement. Great job!