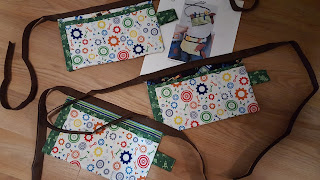 We have decided to not go so crazy this year for Christmas...that said I do still have gifts to make and give.  There are lots of little boys that could use a tool belt so I followed this awesome tutorial and made three last night (one for Colton, Ollie, and Leon) and Kathy helped with some turning out and ironing so they went quicker than I expected. 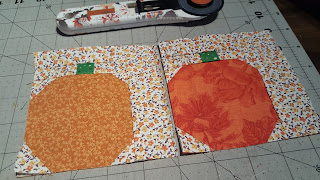 For once I didn't have a morning job so I decided to do the last bitty block (December) but since they are pumpkins I did them in orange.  Here are the blocks..one from each month. 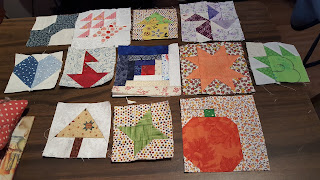 And both sets. I will need to make more so I can make two samplers but for now, putting this away. 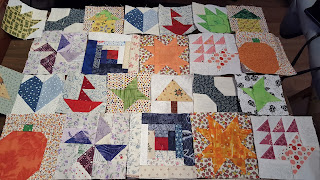 I had posted my tool belts on Facebook and my co-worker friend Kelly asked if she could buy one for her grandson.  I do not sell the stuff I make because I don't want to get into that!  This is my fun.  However, Kelly is the one that brought me in motion sickness bands (which I accidentally left at home in the carry on I decided not to take!) and the week of Kathy's knee surgery she gave me the best homemade lasagna for us...so I am gifting her one to gift..so I made two more this morning.  One will be for Koi. 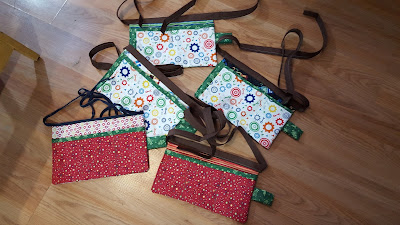 Now I just need to pick up four sets of tools!  Well, time to get ready for work! 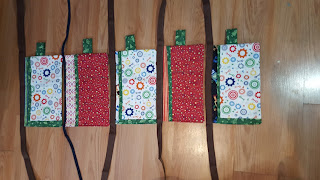 Those tool belts will make nice little gifts. I commend you for gifting one instead of selling it. You save yourself a world of trouble that way!

You Clever Gal you...the tool belts are brilliant.and cute.
I very much agree with you on not selling your/our work..don't need the added stress!
Have a Happy & safe Thanksgiving Andee