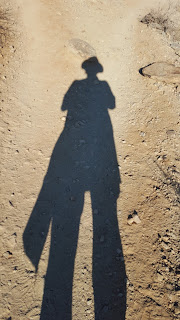 I got up early and went hiking to South Mountain and did Beverly Canyon and the Ridgeline trail with my music in my ears. Went almost four miles.  Felt so good to get in the exercise so I could get home to sew! 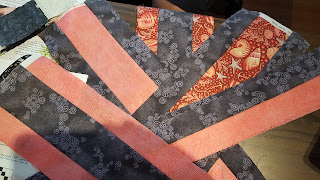 Last night I cut the first clue of the Nimble Thimbles mystery which came out in October while I was on my cruise with Becky and Bonnie.  I really wanted to make this mystery because when I first joined NT they had just made one and all had displayed them in the quilt show.  I thought that was so cool and wanted to get in on that!  So I have begged and begged for another mystery--the timing was not good for me but I really felt obligated to get to it anyway.  Luckily it is much easier than a Bonnie mystery so here is step one... 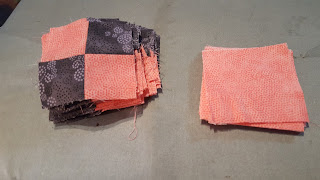 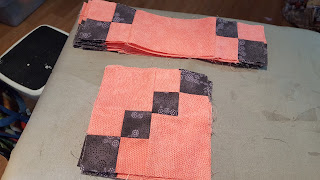 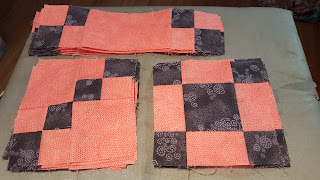 And clue two is done.  I am all caught up til December 8th when we have our Christmas Party and get the next clue!  I love being caught up! 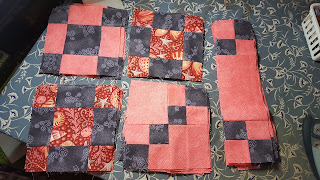 Randy's daughter Rachel is in town since he had a heart attack a few weeks ago.  I took him to the ER and was there when he went into cardiac arrest.  I have never seen real CPR or a defibrillator used in person and it was one of the scariest times of my life.  This was a few days after Kathy's complete knee replacement surgery and she could barely walk so she wasn't even with me.  Anyway, luckily for all of us Randy recovered (100 percent blockage they said he would not have lived had he not been right there when it happened...three stents later...) and quit smoking!  He and I go WAY back and I helped raise his daughter Rachel who is a year younger than my daughter.  She flew in to be with him (she is the one that lives in Norway) with her three year old son Leon.  So good to see her again and meet Leon!  Here she is with Coleman tonight. 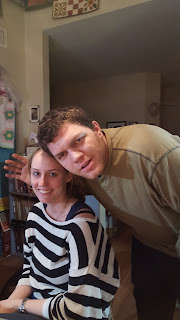 And we had to Skype Hannah so they could hang out too.  These two are sisters at heart.  So good to hear them talk about way back when they met and how they became fast friends at 9 and 10 years old! 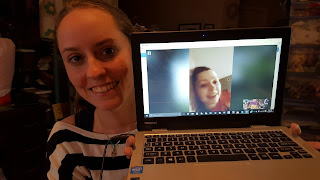 I managed to cut and sew up the last two Talkin' Turkey blocks tonight too!  One blue, one peach.  Here they all are...just waiting for sashing and then borders.  I still have til July to get this one completely done as it is my guild's PUP challenge for this year! 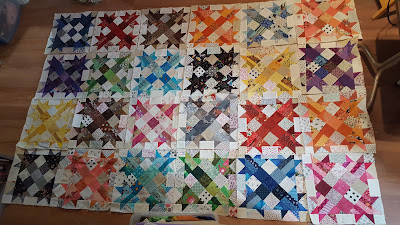 Linking up with Angela of SoScrappy for the Rainbow Scrap Challenge.  This one has been in the works for awhile!
Posted by Andee at 10:31 PM

You are amazing, tackling another mystery at the same time!

Thank heavens you were in the ER when that heart attack happened! That would have been a very scary event.

Another mystery?! ambitious..it does look easier though..
Your TT is 100% Gorgeousness! What a brilliant idea to make them all different colors.

Looks like you are almost ready to finish off those Talking Turkey blocks. Sounds like a scary visit to the hospital. You have been spending far too much time there recently!

Glad to hear that Randy was in the ER when he had his heart attack.
Talking Turkey looks sooooooooooo good in scrappy rainbow colors!! Excellent block choice for a RSC. Looking forward to seeing your blocks become a quilt.

Love the multicolored version. Makes me wish mine was!!