The Gift of a Quilt--a story worth retelling 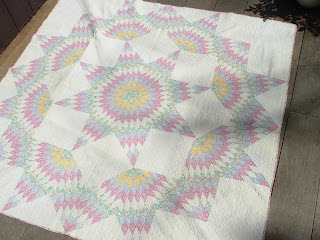 This is the quilt gift I got in June 2006. It was made for my great grandmother Annan (on my dad's side) and she gave it to the woman who was raising her grandsons after her daughter died who I proudly call my Grandma Nan though Annan's daughter was really my Grandmother.

So last Friday I spent the day with my Grandma Nan (my father's adopted mother) cleaning all of her closets, dressers, etc. in preparation of her move Aug. 1st. I am the organizer in the family and the always willing to help one, so I was nominated for the job. I have much fun with Grandma Nan though so I wasn't even dreading it and it turned out to be an amazing day!

While sorting through all of the stuff that has accumulated in her apartment the past 24 years, we came across two quilts in her cedar chest drawer (dressers are not made like that nowadays!) and she told me a few stories that I want to record here. The first quilt we came across was a crib size tiny hexagon quilt which was all hand stitched and hand quilted (hours and hours of work) and had been given by my great grandma Annan (real name Eva Maude Lottridge) to her only daughter Florence's firstborn son in 1944 (my uncle Lewis who incidentally built the house I now live in and died in 1998 of ALS). Somehow when my grandma Florence died Annan wound up with the quilt and later when Grandma Nan married my Grandpa Len and had my uncle Rick, Annan gave it to her for Rick to use since she had no descendants except the boys Nan was raising (Lewis, my uncle Jim and my dad Al). Grandma Nan said she used it with Rick and later with the grandkids, most recently Rick's daughter Lindy.

A little deeper in the drawer we came across a double bed size quilt that looks like a large star in the middle and is surrounded by a larger star. It is pastel colored with pink backing. It is also hand stitched and quilted and is in fabulous shape! It has most likely been in Grandma's drawer with little use these past years. Grandma said that Annan had it made (she thinks) by a friend for Nan and Len to have on their bed after they got married. While I oohed and aahed and couldn't believe that Grandma had never showed it to me since we quilt together on occasion (and in fact most recently made a similar star quilt at her place--though mine is triangles made to look like parallelograms, and this one is actual parallelograms) Grandma just stared at me! I mentioned to her that we should refold it differently so as to lessen the fold damage and she said she didn't know about that and wished she had somewhere to display it...while I started refolding the quilt an idea came to me and I said.....Grandma I just bought a wooden quilt stand ($6.50 at a thrift sale!) and it would look great displayed in my living room...thinking someday...and Grandma said you want it, you take it!!!!! I don't know that I have too many more valuable gifts in my house because I feel like I was given a piece of history and a connection to my Dad's grandmother that I never met and then...

A few drawers later we found a Grandma's brag book with long ago pictures of me, my sister Tina and my cousins Carla and Tricia. I found a picture of me asleep on Grandma's floor and believe it or not, the very quilt my grandmother had just gifted to me was pulled up over me while I slept soundly at about 4 months of age!!!!

Well I just felt like it was meant to be...I don't recall the quilt from my childhood and yet there it was with me (none of the other three babies were with it in any of the pictures) like it had been made for me!

I just had to share my luck and happiness at getting this gift from not one Grandma, but two! 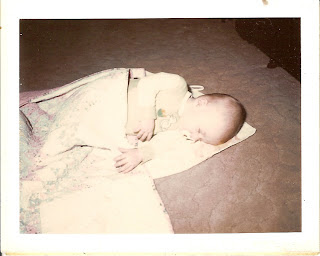 Edit** Here is Hazel Joelle in 2021 on the same quilt.  Five generations down. 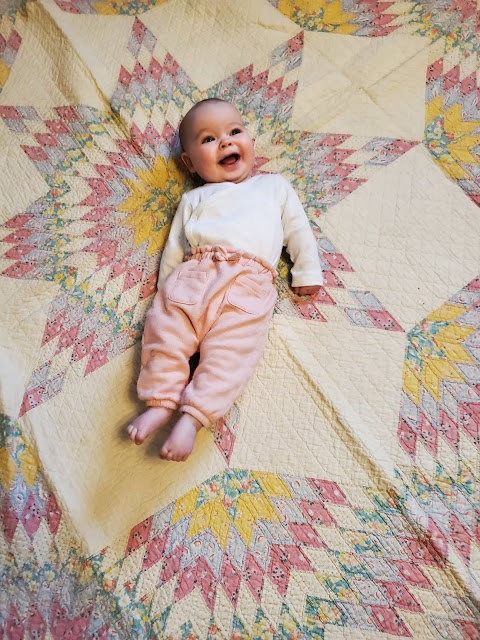