This year's Fall break is happening now.  Kathy is working a different job and cannot yet get time off so we decided to do a weekend getaway to Bisbee and stay at the Shady Dell.  This has been on our list for awhile and with my health (and needing to rest constantly) it was a good fit for this year.  We stayed in the Tiki Bus which was super cool!  We got lots of fun pictures! 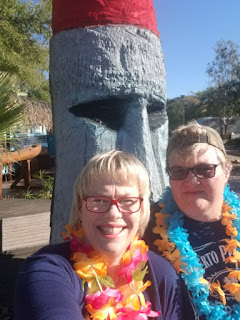 We arrived last Friday night and checked thing out in our bus and then went to bed.  There were two small beds (one smaller than the other) so that was an interesting change!  Our bus did have a toilet but no shower, so we had to use the campground showers but they were really nice.
Saturday morning after our showers, more pictures and a quick exploration of the campground, we went to the Copper Queen Mine and got in on the first tour of the day. Neither of us had ever been down in a mine and we got to ride a little train down there.  It was fun but almost two hours long and a lot of standing, some stairs, etc.  so I was worn out after that.  Sounds crazy, but I seem to need to sleep, sit or lay around a lot or I feel like a wet noodle! 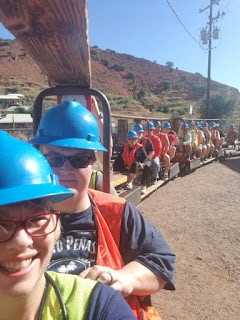 So we went and had breakfast and then shopped for maybe an hour before we headed back to our tiki bus and took a nap and did some reading!  We did go back out for ice cream and a short walk but then came home played games, etc. and early to bed.
Sunday we went to breakfast at Rosa's which was really good.  We planned to hit the museum but we would have had to wait and hour before it opened so we just hit the road towards home.  We stopped in Tucson and I finally got back to the DeGrazia art studio that I had visited with my parents, sister, Uncle Dan and Grandma Char and Papa Delos when I maybe 10. It was not at all like I remembered it (though it may have changed a lot)!  I do remember meeting DeGrazia on that trip...my uncle had a belt buckle with his name on it and DeGrazia actually said something to him like "Hi Dan" and my uncle (only five years older than me at the time) was all flabbergasted as time trying to guess how he knew his name! 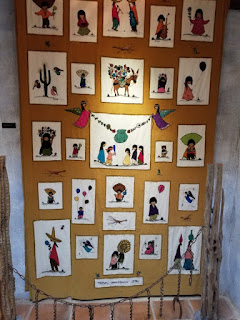 Anyway the stopping on the way home made the ride seem shorter and we were home by late afternoon.  It was a fun little getaway.

I am going to get to sewing later today with my friend Barb and there is one more week of Fall Break left!

Ros has been Busy/! 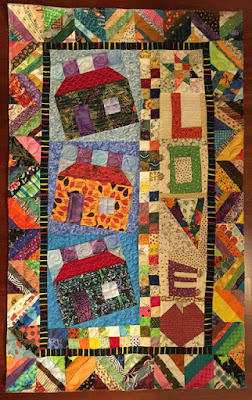 Ros has been busy quilting for me.  I cannot wait to pick up these two beauties!  First up we have the Love Shack wall hanging that I finally made after admiring some of my quilty friends' several years ago. I really wanted to quilt it myself, but I just do not do a great enough job and I want this hanging on my wall for years to come so off to Ros it went.
Then On Ringo Lake finally got done and quilted.  This last mystery quilt of Bonnie Hunter's took me the longest to complete!  I just do not have time for sewing now that I am teaching high school full time.  There is always so much to do (especially these first few years--I imagine it might slow down when I have less to create!)  I teach three or four different classes and one does not even have a teacher's book.  All of them need me to create the worksheets, quizzes and tests. Nothing is handed to me. I like doing all that stuff, but I miss sewing, quilting, reading, etc!
﻿ 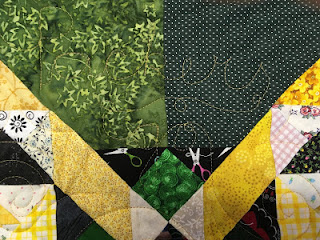 The label hasn't been signed by Bonnie yet, but hopefully when I see her in January I can get it signed.  Kathy and I (and other quilty friends) have signed up for a class at 35th Ave. with her.  We are taking the Spider Web class.  I have always wanted to make this one and in fact the quilt that got me hooked on quilting was along that line and while surfing the net I found Bonnie's pattern and Bonnie!  That was fifteen years ago so funny I am finally going to get to it. I usually change up the colors but think Kathy and I are going to tag team on a red one! 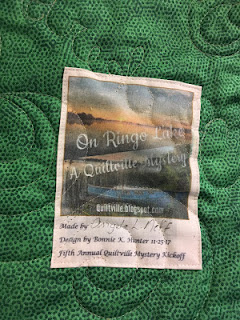 Look at that awesome texture!  I have not decided if I am going to put this in my Packer guest room (and maybe give away the one that is in there) or eventually give this one away.  I am looking forward to the pictures at out next Kickoff party! 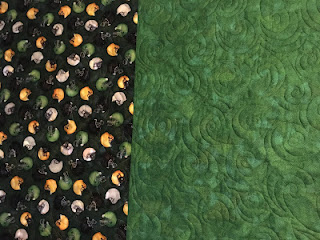 It turned out great!  It is bigger than Celtic Solstice...now to decide which one I can part with!

In other news, my health sucks these past six months. Shots a few times a week now and lots of vitamins. I have reactivated Epstein Barr virus (likely caused from B12 deficiency though not sure what caused that).  Lots of tests ruling out other stuff.  Lumbar puncture next week.  Not looking forward to it, but happy to rule out other stuff.  ﻿
Posted by Andee at 7:45 AM 2 comments: Links to this post